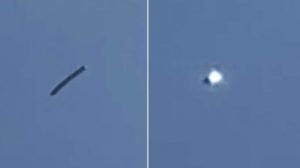 Last month, alien enthusiasts were sent into frenzy when a bizarre UFO shaped like a snake appeared in California above the Mojave Desert. And now, a “snake UFO” has been filmed over Washington.

The video demonstrates a gray cylindrical shape that hovers over Washington in the blue skies. At first it seems stretched out, but then a bright beam of light appears to move and reflect.

“It’s the middle of the day, no clouds, some weird cylinder-looking thing with a flashing light on the end,” behind the camera said video author.

“It’s not a balloon, it’s not a banner because there’s no plane. It’s just flat-up in the sky, it’s been moving positions.”

One Youtube commentator wrote that he spotted a second orb flying above the cylindrical shape: “You can see another white orb…it is only captured once but it is extremely fast”.