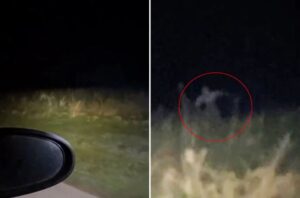 One Palestinian TikTok user driving around at night claims to have captured the moment a mysterious creature leaps through a patch of long grass and hurtles towards them.

At first, in the video, you can hear one of the guys say that he saw an animal in this place. However, then he realizes that in fact, this is not an animal at all.

In the next moment, a frightening pale humanoid figure emerges from the grass and rushes to the car.

The original narrator’s voice also sounds panicked, saying “Dude, what is that?!”. At this point, the camera swerves down, and the clip abruptly ends.

The video had proved popular on TikTok, garnering more than 900,000 likes from more than 6 million viewers.

Users turned to folklore and suggested that the heroes of the video could encounter one of two creatures: a skinwalker, a mythical creature from the Najavo culture, or a windigo, a man-eating spirit.

Meanwhile, skeptics are sure that the video is a fake.