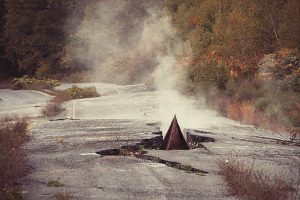 There is a coal mining town in the Eastern United States that was once home to over one thousand people, most of them members of the secret society that founded the town. When the coal fires started throughout the mines fifty years ago, those that didn’t die abandoned the town.

The coal fires burn to this day covering the streets in ash. Those of you familiar with the Silent Hill video games and movie may think that I’m talking about that town, but I’m not – this article is about the very real town that Silent Hill was based on. Welcome to Centralia Pennsylvania…

In 1841 Johnathan Faust came across a robust community of coal miners living in shanty towns throughout what was then Roaring Creek Township of Pennsylvania. Seeking to fill a void and profit by it, he established his bar the Bull’s Head Tavern.

Unknown to Johnathon Faust was that the coal miners all around him were members of a secret society known as the Molly Maguires. The Bull’s Head Tavern would become the default meeting place of the society, and in not too long the center of a new town, Centralia Pennsylvania.

The Molly Maguires came to America from the streets of Ireland during the American civil war. Although historians believe the Molly Maguires were a peaceful organization, they were none the less hunted by the Pinkerton National Detective Agency, and even vigilante groups seeking to collect rewards from the Pinkertons.

These two factions came together in Centralia Pennsylvania with disastrous results. A fire was lit in a land fill on the outskirts of Centralia, some believe by vigilantes hoping to draw members of the Molly Maguires into a trap as they rushed to put out the fire.

The heat from the fire ignited the coal deposits below, and coupled with the oxygen provided through the mining tunnels, the coal mine fires began. Historian, and author of several books on the subject of Centralia, David DeKok, describes the scene below ground:

“This was a world where no human could live, hotter than the planet Mercury, its atmosphere as poisonous as Saturn’s. At the heart of the fire, temperatures easily exceeded 1,000 degrees.”

The death toll amongst citizens of Centralia Pennsylvania and emergency crews alike easily reached into the hundreds, although the exact number has never been known.

As the smouldering coals continued to spew ashes and toxic gas out into the town for the years to come numerous others died of inhalation and many physical ailments, until 1992 when Pennsylvania claimed the lands under “eminent domain’ and formally closed the town for good.

It’s no surprise that the ghost town of Centralia is considered to be amongst the upper ranks of paranormal locations with reports of phantoms and even hallucinations described as being much like the visuals provided in the Silent Hill movie.

However, despite any paranormal occurrences, the town holds its own amongst creepy locations. The buildings mostly lay in rouble with only the larger government building and school still standing, coal smoke rises from the graves of the nearby cemeteries, and the streets are blanketed in ash.

Although tours are available, none will take you into the town or the mines themselves, and for good reason. It’s not the ghosts in Centralia you need to worry about, it’s the town itself.

Where is the Mind? The Mind Exists Without the Brain

The Green Clawed Beast In The Ohio River