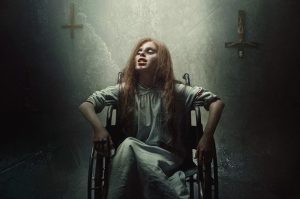 In a 2010 interview with CNN news, Father Gabriele Amorth — known as the Vatican’s top exorcist and founder of the International Association of Exorcists — warned the world that demons are real and influence the lives of believers and the Church.

Though demonic possessions are said to be rare, knowing how to identify a possible demonic influence may reassure and inform those who believe that demons are real and active in today’s world.

There are two major ways that demons influence people, according to Catholic teaching. Demonic possession, the most famous and serious condition, is when a demon takes complete control of a human being’s mind and body.

Demonic obsession, or influence, is when a demon tempts an individual repeatedly in attempts to lead him or her into hurting self or others.

Demonic Possession in the Catholic Church

Demonic possession of Exorcist fame is the most serious form of demonic influence. An individual loses all control over himself/herself when possessed by the devil and is like a puppet moved by a demonic hand.

Friends or family members may not recognize the individual’s words or behavior, as he/she appears to be a completely different person.

Signs of demonic possession may include:

– Speaking in languages the individual has never learned or even heard
– Saying things that do not make sense
– Physical strength above and beyond what the individual is capable of medically
– Loathing the name of God, Jesus, Mary, or the names of any saints or other religious individuals
– Pain or physical discomfort when Scripture or prayers are read or the sacraments performed
– Individuals deemed possessed by the Catholic Church may undergo an exorcism, a ritual of casting out the demon or demons present and healing the possessed individual. Demonic possessions are rare, but not unheard of. Vatican exorcist Fr. Amorth estimates he has performed over 70,000 exorcisms throughout his career (Neill and Messia, “Top Vatican Exorcist,” CNN News, March 17, 2010).

Tempted by the Devil or Demonic Obsession

Demonic obsession is a much more common type of demonic influence according to Catholic teaching. Repeated temptations over time, a demonic obsession attempts to cause harm to self and others.

Fr. Amorth, the Vatican exorcist, claims that it is this type of demonic influence, repeated temptations, that influenced the Roman Catholic priests involved in the pedophilia scandals worldwide in 2010.

Temptations are a natural part of life. When temptations are repeated, obsessive, and urge the person to cause harm and distract from everyday life without the diagnosis of mental illness, these temptations fit the criteria for a demonic obsession.

Fr. Aldolphe Tanquerey, in his 1930 classic The Spiritual Life: A Treatise on Ascetical and Mystical Theology, teaches Catholics two types of demonic obsession: internal and external.

External obsession, according to Fr. Tanquerey, is when demons effect one’s mind through the five senses. Visual or auditory hallucinations designed to terrify the individual or lead him or her into sin, random bruising or wounds, and unexplained scratching, breathing, or other noises are all examples of external demonic obsession.

Internal obsession by demons involves the memory, imagination, and emotions in Fr. Tanquerey’s teaching. Such temptations may include obsessive fantasies that distract from daily life, random bursts of rage or sadness, and negative thoughts or images.

Many cases of supposed demonic activity can be explained by medical or mental conditions, moods, or science. The Catholic Church engages in a rigorous process of discerning any reported case of demonic possession.

This process includes a medical and mental evaluation of the individual claiming demonic possession as well as prayers and rituals of the Church.

Identifying how demons tempt people is a part of Catholic Church teaching, and as long as believers esteem the teachings of the Church, they will also be faced with the dilemma of where demons fit into a modern mind of faith.