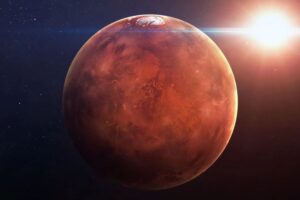 NASA scientists have presented evidence for the presence on Mars of organic salts containing carbon, which is essential for biological life. This is reported by the Daily Star.

In May 2021, researchers announced the discovery of salts that were formed either as a result of geological processes or as remnants of ancient microbial life.

In fact, organic salts are chemical residues of organic compounds containing carbon, on which all biological life is based.

NASA has found organic matter before, but this discovery has provided new clues to understanding the habitability of the Red Planet.

The lead author of the new article James Lewis said:

“If we determine that organic salts are concentrated somewhere on Mars, we will want to explore these areas further and ideally drill deeper below the surface where organic matter can be better stored.

“We are trying to study billions of years of organic chemistry, and these organic “records” may have a major prize: proof that life once existed on the Red Planet.”

To find evidence of life on Mars, researchers must now extract and analyze organic samples.

NASA scientists believe that this is not yet definitive proof that organic salts exist on Mars, but it certainly could indicate their existence.