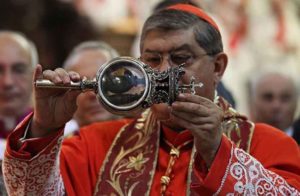 Every time the miracle of the blood thinning of St. Januarius does not happen in Naples, some large-scale cataclysms occur in the world: wars, epidemics, earthquakes, droughts, etc. In 2016, the blood did not become liquid and soon an earthquake happened in Mexico.

The recent event once again has given rise to conspiracy theorists to write that the world is heading for something very dark: in Italy, the annual Miracle of Saint Januarius has not happened.

In Naples, Italy, for several hundred years on December 16, Catholics remove a tiny vial of the dried blood of Saint Januarius from his protective chamber in the Royal Chapel of the Cathedral of Naples and display it to the crowd.

The crowd gathered in the church is eagerly waiting for the blood in the bottle to miraculously turn to liquid. The blood remains in a liquid state for a short time (from several minutes), and then “dries up” again until the next important day. In fact, there are three such days a year, but December 16 is considered the most important and significant.

This year, the miracle did not happen. This is reported by the Catholic website catholicnewsagency.com.

“When we took out the reliquary from the safe, the blood was absolutely hard and remained absolutely hard. It does not show the slightest sign, not a drop. We will wait for a sign with faith,” said Pastor Vincenzo de Gregorio, rector of the chapel of St. Januarius, in end of day December 16, 2020.

As mentioned above, if the blood in the bottle does not dilute, then this is a sign of very big disaster. Legends say that over the past few centuries, blood has refused to liquefy on the eve of 11 bloody revolutions, three large-scale droughts, 22 mass epidemics, 4 wars, 19 devastating earthquakes and 9 deaths of popes.

Is another disaster awaiting us? Only time will tell.