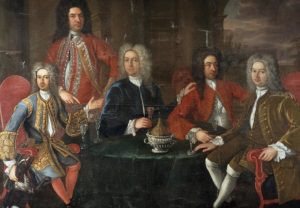 “Fais ce que tu voudras” or “do what thou wilt” was the powerful motto of an elite group known as the Hellfire Club. This notorious secret society was set up to make mockery of the puritanical ways that were so pervasive in society.

The well off financially and well placed politically were bored, and the club gave them an undercover outlet where they could, and would, do whatever they wanted. One historian wrote, “the rites of the Knights of Wycombe, were of a nature subversive of all decency”

The first Hellfire Club was established in 1719 by Phillip, Duke of Wharton, and included of bored men and women of high breeding, although the exact roster is unknown. They met Sundays in pubs, like the Greyhound Tavern or in private homes (since women were not allowed in pubs on Sundays).

Members called themselves, Devils, and attended meetings dressed as characters from the Bible. They performed mock religious ceremonies, and dined on club specialities like “Holy Ghost Pie” and “Breast of Venus”. Wharton’s club disbanded in 1921, but Wharton himself joined the Freemason’s, and went on to become Grandmaster of England.

A more notorious group, founded in England by Sir Francis Dashwood. This group met from the 1740s through the 1760s, and involved both men and women of high stature.This group was tied heavily to the politics of the day.

While the exact roster is not known, some of the members are supposed to be Robert Vansittart, William Hogarth, Thomas Potter, Francis Duffield, Edward Thompson, Paul Whitehead and Lady Mary Wortley Montagu, who was a co-founder of the first Hellfire Club. Exactly what happened at these club meetings is not known.

Many believe that the Hellfire Club met irregularly to perform immoral acts involving sex and drinking, as well as devil worship. Church rituals were turned upside down. The Dashwood group, also called themselves The Order of the Friars of St Francis of Wycombe after Dashwood leased the abandoned Wycombe Abbey for Club meetings.

The group would dress themselves as Monks to attend club meetings. Again, the idea was to mock the rituals of the church with outrageous imitations. Prostitutes were brought in, and dressed as nuns. Sex acts were performed as ritual.

Drink flowed and lavish banquets were served. Rumors of Black Magic circulated about the club, and it was thought that the meetings were devoted to demon worship.

But, despite their ‘satanic’ rituals, the members of the Hellfire Club seemed more aligned with worshipers of Bacchus and Venus. For the sophisticated club members devil worship was a joke on the ‘ignorant’ population….wine and Sex being much more appealing than darkness.

Benjamin Franklin, one of the founding Fathers of the United States of America, a man who wrote the opening words of the Declaration of Independance, was considered to be a member of the Hellfire Club. Franklin was openly involved with a few secret societies.

He was a known Freemason, and some suggest he was a Rosicrucian Grandmaster which put him at the center of the Illuminati conspiracy. In the late 1750s, Benjamin Franklin was in England, where it is surmised that he was ‘Agent 72′ of the recently established British Intelligence Agency.

The Intelligence Agency considered the Hellfire Club meetings to be a good cover for their agents to get together with the political movers of the time. Sir Francis Dashwood, founder of the Hellfire Club, was the English Chancellor of the Exchequer, and became very good friends with Franklin.

They shared Masonic and occult interests. Their friendship revolved around power and politics, and the strong desire for control, and it is certain that Dashwood made Franklin a member of the Hellfire club.

ONLY true members of the Hellfire Club were allowed into the underground meeting areas. To have seen them, he must have been a member.

Meetings of the Hellfire Club would convene twice a year in March, June, August, or September. Paul Whitehead, who was Dashwoods right hand man, and a poet in his own right, would send invitations to the chosen few.

While records have been destroyed, some aspects of the meetings are described in Nocturnal Revels, a book written in 1779. The party would come together for a banquet. “Mirth, pleasantry, and gaiety” were encouraged.

Women were brought to the party, with the idea that celibacy was not an issue. Male visitors could be brought along, but only if they brought with them “wit and humour”. After the meal, the inner 12 was said to retire to the attic for secret rituals.

Whitehead was the secret keeper for over 30 years, even after the Hellfire Club waned. Three days before his death, it is said that he burned all records and books kept about the club in a massive bonfire that burned for over 76 hours.

When it was done, he took to his bed, and died, taking his secrets with him. His body was donated to science, but his heart was to be kept in an urn in Francis Dashwood’s mausoleum.

Mystery of the Real Men in Black: Researchers Are Sure That They Are Not Humans