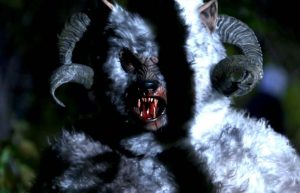 In the mountainous and densely wooded areas of Appalachia a creature called Sheepsquatch lurks. The beast is also called “White Thing”.

The Sheepsquatch has been sighted on many occasions across a large area, including Virginia and west Virginia. Unfortunately, the reports of White Thing often lack details, like names and exact locations.

The descriptions of the Sheepsquatch, however, do seem to be consistent. The creature is said to be about the size of a medium-sized bear and usually walks on four legs.

The saber-toothed monster has dirty white fur, paws like a raccoon and a long hairless tail. It also reportedly has a strong stench like sulfur. There doesn’t seem to be any first sighting of White Thing, but the story seems to go back decades, if not even further.

One of the few Sheepsquatch reports that does provide a lot of detailed information comes from a man named Edward Rollins.

In 1994, Rollins had been recently discharged from the Navy and returned to his home town of Gallipolis, Ohio. As a boy Rollins had an interest in the famous Mothman story. 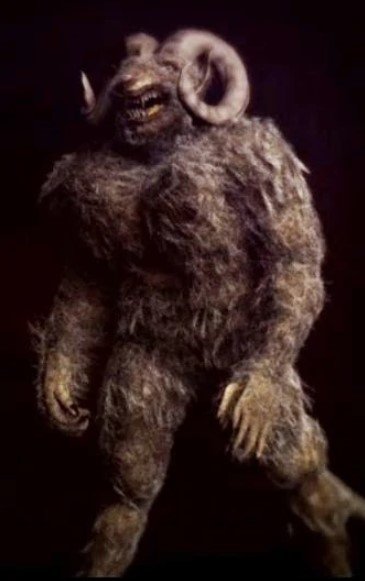 His mother had kept a scrap-book with all the newspaper clippings of the Mothman case in Point Pleasant, West Virginia, and Rollins remembers looking at the scrap-book often.

As Gallipolis is located just a few miles across the Ohio River from Point Pleasant, he decided to visit the area where the Mothman once roamed.

When Rollins arrived in Point Pleasant he went to what is known as the TNT area where Mothman was first reported. Walking along a creek bank Rollins heard movement in the woods.

He had no fear as there were no predators in the area. Whatever it was, he could tell it was moving in his direction. Just to be safe, Rollins slipped behind a tree and watched.

Emerging from the woods was, as he described it, a White Thing, the size of a bear with two horns like a goat, fangs like a saber toothed cat and a long hairless tail.

The Sheepsquatch went to the creek and took a long drink. He could then see that the creature had paws like a raccoon, with long fingers. After finishing his drink, the White Thing moved back into the woods.

Within the same year, two children observed the creature while playing in their yard within Boone County. What they reported having observed looked like a large white bear yet in this case stood up on its hind legs, making it over six feet tall (presumably it did so in a manner similar to bears trying to observe as opposed to walking bipedally).

Startled by the children, the beast ran off through the forest, breaking medium-sized limbs off of trees in its path. 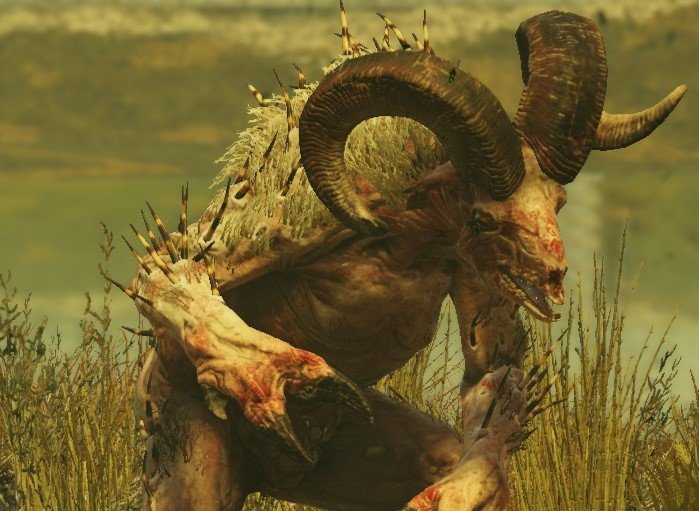 One of the campers first saw the beast at the top of the near by hill, in a crouching position. Then it stood up, and he alerted the other campers. Then it started running down the steep hill toward the campers, but they were separated by the river that was flowing through.

They look in horror as it searched for a way to cross, and with no other option, began to wade through the river. It finally came out of the water, and the campers reported that it appeared like a bipedal dog in the chest, with its fur wet from the river crossing. Then a loud gut-based screech was heard about two miles off from where they were.

Then the Sheepsquatch looked up in shock, just high enough so the moonlight was in its face, and the campers looked on in fear as it let out a pathetic whimper, then in a sprint, ran in the opposite direction of the noise.

The campers quickly packed and left, then reported it to the locals, fearing that if the authorities were informed, they would be ridiculed. The identity of the campers is unknown as of March 2016.

What Rollins or the others that have reported seeing the Sheepsquatch have encountered remains a mystery. But sightings continue to be reported in an ever-increasing area.