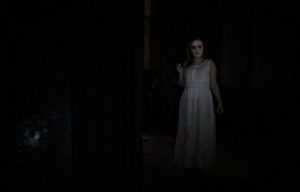 I can’t remember when I first started to recognize faces. But I do remember my mom and dad as first two faces I saw and recognized. There are other faces too. I remember them watching me in my crib. They are the few memories I still have about time the when I was a baby. I don’t remember any other relative at that time. But I remember her clearly than anything, even than my mom at that time. When I grew up, I went through every photo album in the house and tried to connect the faces I saw when I saw a baby and apart from my parents, there was none. Also she wasn’t there too.

The first time I saw her was when I was laying on my crib and there was this group of people standing around me and watching me. There I notice this girl standing and watching me. Scene that day I saw her countless times. Every time I saw her my mom is not near me or can’t see me. She wore a white dress and it was so beautiful and elegant, it matched to her pretty face perfectly. She had curly golden brown hear that fell to her shoulder. Thinking about her now, she looked like at age of 18 or 20 years of age and her clothing showed she was very wealthy European lady who lived during the colonial era. She had the kindest face and smile.

While I grew up, often I was left alone in the house. My mom told me I was a gentle child back then. But she still has no idea I really wasn’t alone at the house. Every time I was left at house alone, she was there with me. She sometimes played with me or sometimes she sits on a couch and invites me to sit with her. For some strange reason I obeyed her every time. I can feel what she wants to say by just looking at her eyes. Her eyes had faded brown color with little bit of grey. Sometimes she looks at me with a sad full expression and I remember doing my best to cheer her up. She spends some time with me and then gets up and leaves the room and soon as I lost her from my line of sight, often my mom or dad comes.

We have a big forest behind the house. So I went in there because I was alone at house and there were many trees to climb and fruits to eat. Also it was like a new world to my small mind. It was literally a new world. When I entered there sometimes I see soldiers marching there (red coats I learned during history classes) or men and women walking or riding on horses or on a carriage with a guards following them. I see her among them too, still alone and watching me with sad eyes. I always had the feeling she lost her lover and waiting for his return.

I saw her until I was 14 or 15. After that I rarely saw her. I was 17 when I realized I can see ghosts and after that I rarely saw her again. But I know he is still around me, and that fact doesn’t make me feel scared. I feel comforted at that. I don’t like ghosts, but I like her a lot. I don’t know why but I just do. I want her to find peace but at the same time I don’t want her to go. There are sometimes I feel she is near and when I turn to look I see something moving so fast or at sometimes I get to see part of her dress as she moves away fast. I can’t see her clearly as I did before but I know that’s her. Is that her way of telling me she is watching me?

I moved away from my parents’ house to my own house and even there I can feel her presences. I have seen many ghosts and they never stay long enough. But I have a feeling she was with me the moment I was born and she still with me. I do a cleansing once a year, maybe that’s why I can’t see her clearly now or she don’t stay long enough. I don’t want to call her as a ghost; to me it is like an insult to her. Thanking back how many times she stopped me doing very stupid or dangerous things (she comes near me and shake her head when I up to something stupid) I think her as some sort of guardian. I like to think about her that way.