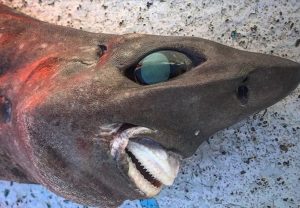 A bizarre deep-sea shark with bulging eyes and a frightening, human-like smile was recently pulled from the depths off the coast of Australia. Shark experts aren’t sure what species the creepy creature might be, adding to the mystique of the unusual specimen.

A deep-sea angler known online as Trapman Bermagui caught the mysterious shark from a depth of about 650 meters off the coast of New South Wales in Australia.

The shark’s unusual features quickly caught the attention of other netizens who were either amazed or frightened by the creature.

Commentators also speculated about what species the shark belonged to.

Dean Grubbs, a marine biologist and shark expert at Florida State University, concluded that the dead shark was a dogfish (Centroscymnus owstonii), a species of sleeper shark in the same family as the Greenland shark (Somniosus microcephalus).

“It’s a swallowing shark,” said Brit Finucci, an angler at the National Institute of Water and Atmospheric Research in New Zealand who specializes in deep-sea sharks.

However, it is not clear which species in this group it belongs to, she added. Charlie Hoeveniers, a shark specialist at Flinders University in Australia, said he agreed with Finucci’s identification and that the animal was most likely a swallowing shark.