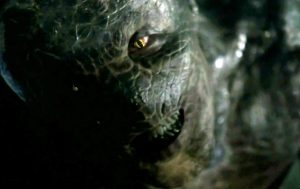 In the plot of the latter, Jean Grey absorbs solar flare-like energy from space. What she does not know is this energy has a persona of its own and slowly takes her over as the course of the film goes on. It causes Vuk and her D’Bari species to seek out Grey for their own good.

The reason is that the phoenix force that’s now inside Grey destroyed the D’Bari homeworld and they seek to manifest its power for their own purposes. The D’Bari are shapeshifters, and their leader, Vuk, takes the form of Margaret Smith, an innocent woman who is caught up in the events of the film.

Shapeshifters are known for taking the form of humans. They enjoy passing themselves off as a different species and blending in. It doesn’t stop any other powers they could have though. They only take the form of humans in images and can still fight off any of their enemies.

It begs the question of why Vuk did not simply take the form of Grey if she wanted to be like Grey. It could be possible for her to gain Grey’s powers that way as well. Vuk and her species want to make use of the phoenix powers but also make earth into their new adopted home world.

While Dark Phoenix might be many things in the superhero world, it’s also one of the first that directly deals with an alien invasion outside of Man of Steel and Batman v Superman: Dawn of Justice. For the shapeshifters, they eventually do not seek to stay hidden.

When they make their presence known, they do not care what form they are in as they fight our heroes. They might look like crazy humans attacking a good guy or two but they are actually just shapeshifters taking their forms.

For our heroes, a shapeshifter poses multiple threats. Not only are you uncertain of whether they are the actual person you know but they might turn on you at any minute. It could be a difficult dilemma to be in if you were in such a situation.

A major point in looking at this type of pop culture is whether or not these creatures exist. Could something such as Dark Phoenix happen in our world? It’s certainly possible and not something we would be able to tell right from the start either.

Since shapeshifters take the form of others, it would be extremely challenging for us to tell whether or not these creatures were even among us. Since they are known to take our form and observe our movements and habits, it could be they are here but we might not ever be able to tell who they are.

They could be with us for many years to come and be hiding in plain sight. With that said, our defenses would be down because we would think that the shapeshifter was the actual person we liked. This could pose a great problem to our stability as a world but also as people too.

Shapeshifters could even be controlling the levers of power across the world. Imagine if shapeshifters posed as world leaders and brought countries to war just because they could take the form of world leaders?

It is scary indeed to think about the possibilities of what shapeshifters can do. If they are defeated once, they can always take the shape of someone else. Even without that, it’s still possible for these creatures to take our form and control our world.

If they indeed succeed and humanity does not have a sonic bridge, we could all be doomed. That’s just how the cookie crumbles, it seems. The end could be upon us and we might not even be aware of what’s coming. It might be too late already….