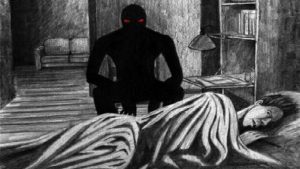 A shadow person, also known as a shadow figure, shadow being or black mass, is an alleged paranormal entity. Paranormal researcher Heidi Hollis has expressed the belief that shadow people are malevolent supernatural entities.

A number of religions, legends, and belief systems describe shadowy spiritual beings or supernatural entities such as shades of the underworld, and various shadowy creatures have long been a staple of folklore and ghost stories.

Shadow people are dark, shadow-like figures that can appear in the corner of a person’s eye or in the person’s full field of vision. Like apparitions, shadow people can appear totally solid, translucent, full-boded, or only partially formed. Most often they have a distinctly human form, but sometimes they consist of ambiguous shapes that seem to float above the ground.

Little is understood about shadow people, with some experts believing they are really just ordinary apparitions that appear “dark” in color, while others classify them as a different phenomena.

The Paranormal Guide takes the view that shadow people are distinct from apparitions because there are a number of accounts of shadow people “following” a person for a number of years, even though that person has had no loved ones die recently.

Shadow people should not be confused with sleep paralysis, which is sometimes accompanied by the perception of a dark or shadowy figure in one’s bedroom.

It is not known whether shadow people are apparitions, demons, or a truly distinct form of paranormal activity. There are no reports of communication with shadow people, but given shadow beings’ propensity to follow one person, it would appear as though they possess intelligence, unlike residual hauntings.