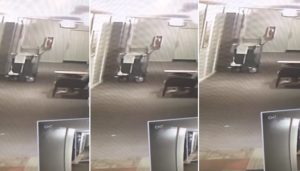 The surveillance video, released a few days ago, shows a mysterious dark shadow figure moving in and out of the hallway very quickly.

Employees have reported seeing a small shadow out of the corner of their eyes, sometimes they hear giggles.

The doorway that you see in the footage is actually the opening to the elevator, and when the door opens, a light comes on – if there’s no light that means the door is closed, which means the shadow entity came out of nowhere.

Some things had come up missing off the housekeepers’ cart and so she ran the cameras back. Here’s what she saw:

The Footage has sparked a flurry of speculation among believers in the paranormal, with some claiming that the black figure is a “demon” a “imp” or a “ghost”