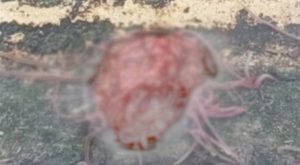 After heavy rainfall, this horrible writhing mass was found out on the street outside an apartment block. The footage of the disgusting looking specimen went viral earlier this week, leading users of social media to speculate about what kind of creature it might be.

The organism turns out not to be one but dozens of intermixed tubifex worms. “I nearly decided to kill,” said the man who discovered it. “It was a squirming, throbbing, amorphous mound of tangled worms with a constant stream of more worms drifting through.”

Tubifex worms, which feed on detritus (dead organic matter) like common earthworms, are usually found in the ground near water bodies such as rivers and lakes. In this case, it is probable that the rain washed them out in to the open. A similar phenomenon occurred virally in 2009 following the discovery of a mass of worms in a sewer.

“They coil around each other in the absence of soil,” said bryozoologist Timothy Wood.

“The contractions you see are the result of a single worm that contracts and then almost simultaneously stimulates all the others to do the same, so it looks like a single large muscle. ”