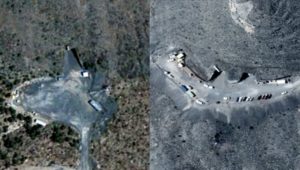 A user of Google Earth has found satellite images of what appears to be a secret entrance on a mountain slope that allegedly leads to the world’s most notorious military base – Area 51.

He decided to share images taken over the years in the same area including a 1998 image in which the entrance and the roads leading to it do not appear.

Two parking lots that lead to the foothills of the mountain can be seen in a video published on the YouTube channel FindingUFO.

One of them seems to be next to an entrance that leads into a tunnel carved into the hill.

The person who discovered and released the photos that have created a sensation on social media claims they represent the entrance to the site of the secret US Air Force base – Area 51.

Area 51 could be much larger than it would seem on the surface. However, it is still difficult to determine exactly how large this underground complex is and what it hides inside.

Bob Lazar claimed in 1989 that he had worked at Area 51’s “Sector Four (S-4)”, said to be located underground inside the Papoose Range near Papoose Lake. He claimed that he was contracted to work with alien spacecraft that the government had in its possession.

Astrophysicist explained the complexity of the search for extraterrestrial civilizations