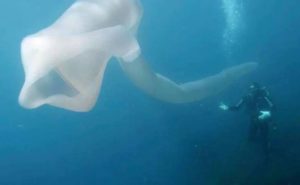 Two scuba divers stumbled upon something incredible throughout a recent excursion off the coast of New Zealand. Similar to a long hollow windsock, this confusing sea monster is actually not one, but hundreds of thousands of individual organisms that survive with each other as a colony.

Recognized as pyrosomes, they can be found all through the Pacific but hardly ever appear this large.

“Having never observed one in person or even footage or photos of one before, I was really disbelieving and elated that such a creature existed,” said diver Andrew Buttle.

“It was very puzzling but also awesome to be able to see it right up close and spend so much time with it. I believe it is possibly a pyrosome – sometimes they are noticed in nets but not many undamaged large specimens have been caught to my knowledge.”

“At times there can be blooms of thousands of small versions of these creatures in many parts of the world, but not something I had ever seen before.”

The worm can be seen shifting smoothly thru the water, sometimes shuddering and pulsating while the divers swim carefully around it so not to interrupt it.

The Virgin Mary appeared to the woman in Uganda village