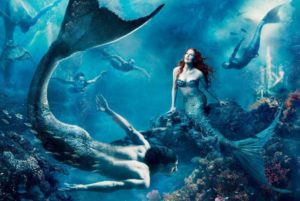 Recently, a Scottish council received a letter warning that workers’ lives could be put at risk by fairies, reports scotsman.com.

The letter, written by a group calling themselves’ Friends of the Eilean Fhlodaigearraidh Faeries,’ was sent to the planners of the Highland Council in response to plans for a new fish farm being considered for a site off the coast of the Isle of Skye.

Signed “on behalf of the Flodigarry Fairies” the letter stated that, if the salmon farming venture were to go ahead, the local mermaid-like “ashrai” population might suffer a terrible fate.

“Ashrai live for hundreds of years and will come up to the surface of the water once each century to bathe in the moonlight which they use to help them grow,” the letter reads.

“It is proven that the steel of the fish farm cages draws many ashrai to the surface, with only one result: they melt.”

The letter also cautioned that anyone who works on the planned fish farm would be in danger of being lured to their doom by promises of gold and jewels from supernatural inhabitants of the area.

Water spirits known as the’ Blue Men of the Minch’ were also mentioned. In the end, plans for the fish farm were rejected after a six-hour consultation

However, it remains unclear exactly how much the threat of fairies contributed to the decision.

Horror in Honduras: the chupacabra killed the second man