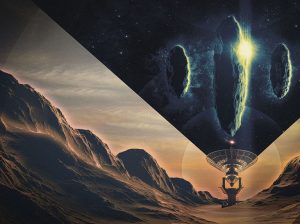 Scientists at Pennsylvania State University have created technology that can use a star’s ability to focus and amplify messages passing through the solar system. The results of the work were accepted for publication in the Astronomical Journal.

The study describes the Sun as a kind of node in an interstellar communication network, including probes or relays near our Sun, acting as cell towers in space.

Communication at interstellar distances can use the star’s ability to focus and amplify communication signals through an effect called gravitational lensing.

The signal from or passing through the relay probe will bend under gravity as it passes the star. The curved space around an object acts like a telescope lens, focusing and magnifying the light. A new study by scientists at the University of Pennsylvania has scoured the solar system for communication signals that the sun could use.

The study discusses an effect called gravitational lensing, which is part of Einstein’s general theory of relativity and involves the bending of light as it passes massive objects such as stars and black holes.

This causes the space around the object to warp, focusing and magnifying the light, much like a telescope lens. Scientists suggest using the same method to transmit messages over vast distances in space.

“Astronomers have considered using gravitational lensing as a way to build a giant telescope to observe planets around other stars,” said Jason Wright, professor of astronomy and astrophysics at Pennsylvania State University.

“It was also seen as a way for humans to communicate with our probes if we ever sent them to another star. If an extraterrestrial technological species uses our sun as a lens for interstellar communication efforts, we may be able to detect these messages if we look in the right place.”

The scientists used the gravitational focus of our Sun, which is located at about 550 AU. (astronomical units) from us, and one a.u. equal to the distance from the Sun to the Earth, and 550 a.u. lies between the orbits of Jupiter and Saturn.

For gravitational lensing, the gravitational focus is where light bending phenomena occur, and this study believes that this is where the closest aliens probe will be in our solar system to use our Sun as a lens.

Unfortunately, the researchers did not detect any signals of extraterrestrial origin at the wavelengths they observed, but the study was conducted only one night.

However, understanding how we can communicate with extraterrestrial civilizations beyond Earth has undoubtedly proved invaluable to both the faculty and students involved in the project.