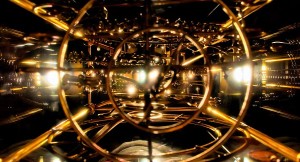 The corridor of time does exist, but such a tour is trillion times riskier than a cruise in a basin with holes about the Pacific

A student from the Massachusetts Institute of Technology decided to organize a party and invited guests from the future, those who travel in time, to it. Guests may come in casual wear but must necessarily present evidences proving that they are not impostors. These may be medicines to cure AIDS or cancer, cold synthesis reactor or a thermonuclear reactor and things like this. Black hole

Modern science cannot give a definition of time. What is more, it cannot also prove that traveling in time is impossible. Anyone who goes for such a tour would inevitably grow older during the cruise according to the universal law of entropy growth. This is not a joke that meeting a grandchild of yours is quite possible according to the modern physics canons.

How can a human build a time machine? The recent sensational discoveries in the black holes sphere offers majority of opportunities for this purpose. Many of the discoveries have already won Nobel Prizes. Black holes are the vanguard of science, but it is not correct to believe that the existence of black holes is proved once and for all.

Physics laws are symmetrical: if there is a black hole in which everything may drop but nothing can burst out from it, there must necessarily be a white hole into which nothing can fall but everything gets out of it. In other words, if one jumps into a black hole in one place he may jump out of a white hole in some other place. Does it sound crazy? According to Einstein’s theory of relativity, there are solutions of this type.

They are very instable, and a corridor from a black to a white hole may get closed because of slightest perturbations. This corridor does exist, but such a tour is trillion times riskier than a cruise in a basin with holes about the Pacific. Any physical body may be crushed in the center of a black hole.

The Director of Sternberg Astronomy Institute, the Russian Academy of Sciences, Anatoly Cherepaschuk, does not think the issue of traveling in time is too fantastic. On his way to the center of a black hole an astronaut will see his future and another universe disposed to our universe in the future.

The astronaut would have to move quicker than the light speed to get into this universe some other way, which is impossible. Unfortunately, the astronaut will not be able to get back and tell what he saw in the future. He will not even go down in historical chronicles; outside spectators will always treat him as standing not further than the black hole verge.

Recently, some encouraging theories were developed to prove that some objects having no horizon of events exist in the powerful gravitational field; this allows traveling there and back in a time machine. American Kip Thorne and a member of the Russian Academy of Sciences, Igor Novikov, working in the west are connected with calculation of such objects. These objects are called mole burrows or space-time tunnels.

Mole furrows are built of exotic vacuum-like material with negative pressure. In the tunnels, time goes back with respect to the outside space. Astronomers of the world dream of finding these mole furrows in the universe with the help of telescopes.

Many fiction authors described traveling into the past where people found the present-day world changed after the voyage because of their doings in the past. But physics theories state that these actions cannot be fulfilled with the help of a time machine: not only the past has an effect upon the future, but the future also influences the past. The cause-effect relations are very stable, and all events happen in such a way that they cannot be changed.