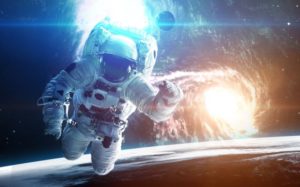 It turns out that powerful radiation in outer space is not the main problem of long-distance flights to explore other planets. Scientists from Germany have found that microbes pose a great danger to astronauts.

Previously, researchers found that after being in outer space, staphylococci and enterococci acquire resistance to antibiotics. A similar effect was seen on crops grown by a team of scientists at the French-Italian research station Concordia.

Research results have shown that under extreme conditions microorganisms not only adapt to them, but also enhance their defense mechanisms.

In addition, American researchers have found that bacterial mutations in space are accelerating. By adapting to environmental conditions, bacteria on Earth have become even more infectious.

In addition to radiation, microorganisms are also affected by the lack of gravity and other factors that cause bacteria to change their behavior. Some microorganisms create a kind of biofilm and begin to produce various compounds and substances that are unusual for them in terrestrial conditions.

In other words, the cosmonauts have a very dangerous “company” in the form of destructive colonies. Membranes created by bacteria begin to actively grow and harm human health and plant equipment.

In general, scientists still have to solve a lot of issues related to the preservation of the health of astronauts.