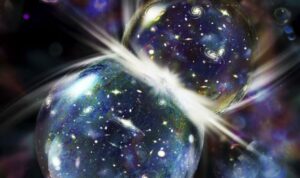 In the scientific community, it is customary to consider the current model of elementary particle physics to be practically the only correct one. There is every justification for this, since numerous calculations and practical experiments show the reliability of many provisions of this model.

However, there are provisions in the Standard Model that do not fit into the overall picture.

A team of international scientists has proposed a different model that closes these gaps. The scientific journal Physical Review Letters wrote more about the thoughts and calculations of scientists.

When they talk about gaps in the Standard Model, they mean dark matter, the acceleration of the expansion of the Universe, and the discrepancy between the actual mass of the Higgs boson and the measured one.

A team of scientists from France and Switzerland explained the last gap with a new model of the formation of the Universe, built on the theory of multiverses.

Scientists have suggested that during the formation of our universe, there were other similar universes (parallel universes). The Higgs bosons were distributed randomly in this case: some received a heavy boson, while others, on the contrary, received a light one.

Based on this, the scientists developed a model that showed that universes with a heavy boson subsequently collapsed.

As a result, according to scientists, only our Universe remained with a light boson due to the symmetric strong interaction.