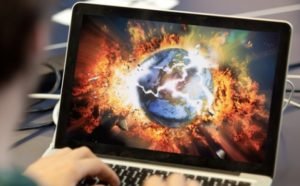 A powerful solar flare could lead to massive disruptions and trigger an “Internet apocalypse”.

The corresponding warning was published by the Swedish edition of Dagens Nyheter, citing an information technology specialist from the University of California Sangeetu Abdu Jyoti.

During such an outbreak, the expert argues, the first thing to suffer is not the large servers that can be protected, but the submarine cables, which are the basis of the Internet.

“The probability is about once in a hundred years. But over the past hundred years there has not been a single such storm, which means that it may well occur during our lifetime,” the specialist is sure.

Coronal mass ejection is a solar flare, during which charged particles are ejected towards the Earth. When they reach the Earth’s magnetic field, a geomagnetic storm occurs – it is especially noticeable at the Earth’s poles in the form of the aurora borealis.

It is believed that a weak storm can provoke minor interruptions in the operation of power systems and affect the migration paths of birds and animals, stronger ones affect shortwave communications and navigation systems, and can also cause voltage surges in industrial networks.

Since then, human civilization has become much more reliant on the global internet, and the potential impacts of a massive geomagnetic storm on that new infrastructure remain largely unstudied, Abdu Jyothi said.

“The economic impact of an Internet disruption for a day in the US is estimated to be over $7 billion,” Abdu Jyothi wrote in her paper. “What if the network remains non-functional for days or even months?”

When the next big solar storm does blast out of our star, people on Earth will have about 13 hours to prepare for its arrival, she added. Let’s hope we’re ready to make the most of that time when it inevitably arrives.