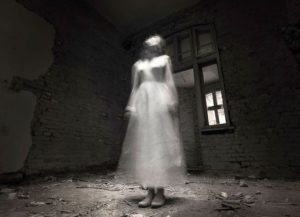 Scientists have put forward some theories about the possible reasons for “encounters” with the “supernatural”.

Neil Dagnall, a psychologist representing the City University of Manchester, noted that one of the common causes of cases of alleged encounters with ghosts is poisoning with toxic compounds, including formaldehydes and pesticides. When using the latter in everyday life, it is recommended to use a respirator.

Another reason is sleep paralysis, a neuroscientist from the University of Cambridge Baland Jalal spoke about the features of the phenomenon. In the mentioned state, the person has already awakened from sleep or has not yet fallen asleep, but remains conscious.

At the same time, he cannot move, various kinds of hallucinations may occur, paranoia or a feeling of pressure on the chest is possible. Although sleep paralysis is relatively harmless, it can be frightening or even traumatic for unprepared people. Many believe that they are faced with “evil spirits”.

Suggestion is a powerful tool of influence. Sometimes it can make impressionable people believe that otherworldly forces are real. An experiment conducted by Professor Richard Wiseman involved inviting a fake medium who would “speak” to a group of people, conducting a “séance”.

At the end, he stated that the table moved in the process. About a third of those present confirmed his statements, although in fact the furniture remained motionless. When a person believes in paranormal phenomena, he is more likely to see something similar even where it does not exist.

It also happens that a person sees ghosts because of the games of his own brain. One of the “mistakes” affecting the latter is pareidolia. With it, illusory images can be seen against the background of ordinary real objects. For example, it seems to some that clouds form into the shape of animals.

This situation is due to evolution, in the past it helped the ancestors to recognize the threat due to the general outlines.

Often, spirits and ghosts appear in old buildings or basements. This is not just because it is in such places that mold and fungus most often spread. They carry toxic compounds through the air that can provoke hallucinations. This could also explain why people in supposedly supernatural habitats feel sick, dizzy or have headaches. All this is characteristic of poisoning the body.

Of course, these are just theories and no one really knows why people see ghosts.

Something Huge is melting out of the Antarctic Ice Sheet