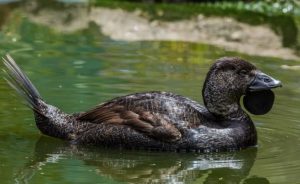 On the recording, you can hear the duck mimicking the phrase “you bloody fool”, which she learned in the Australian bird park.

Karel Ten Keith said that the most interesting thing here is not so much in the message as in the fact that a duck can generally imitate people.

“It’s definitely based on the human voice, although the pronunciation is a bit odd, like an Australian accent,” said Ten Keith.

The scientist first wondered if the recordings made in the 1980s could be a hoax. They were obtained by ornithologist Peter Fullagar, who co-authored the study.

The recordings were kept in a sound archive until Ten Keith stumbled upon them in the course of his research on bird studies. Ten Keith said the duck can also make sounds similar to the sound of a door closing and the clicking of a latch.

Certain species of animals, and in particular birds such as parrots and songbirds, are capable of imitating human speech. But this phenomenon is rare – albeit somewhat more common in animals raised by humans.