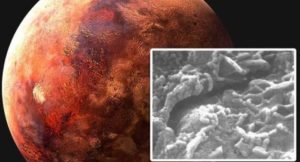 Recently, scientists have been increasingly trying to find confirmation that life once existed on Mars. The rapid development of technology allows researchers to get more answers to this question.

NASA geochemists Chris Romanek and Everett Gibson studied a meteorite previously discovered by American experts from ANSMET, and saw in it fossilized creatures similar to worms.

The fallen space rock (ALH84001) was discovered by geologists in the middle of the Antarctic desert. Then it was classified as an ordinary piece of an asteroid and safely sent to storage.

Only in the nineties, the piece was remembered and handed over to NASA experts for research, who found out that the space guest flew to us from Mars and is about 4 billion years old. However, before getting to Earth, he drifted through the solar system for almost 13 thousand years.

Geochemists have found unusual orange grains inside the meteorite, as well as microscopic worm-like particles that closely resemble terrestrial bacteria.

Studying a piece of a meteorite, the researchers found that in the past the atmosphere of the Red Planet was more hospitable than it is now at -60 degrees Celsius.

Despite the fact that scientists are more than ever convinced that the find confirms the existence of life on the Red Planet that existed in antiquity, skeptical scientists are not ready to consider this one hundred percent proof.

Bizarre Flying Human-Like Figure Filmed Above The Skies Of Burbank