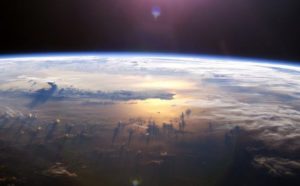 Scientists from the University of Hawaii and Kyoto conducted a study and came to the conclusion that the atmosphere of our planet has its own “sound.” According to researchers, this is due to certain vibrations that are somewhat reminiscent of a bell ringing.

The human ear is actually not able to hear such sounds, since they look like large-scale waves of atmospheric pressure passing along the equator throughout the planet.

The movement of waves of one part of the waves occurs from east to west, and the other part in the opposite direction. In this case, the waves create resonant vibrations.

It turns out that this phenomenon was observed by scientists back in the 19th century. Since then, this theory has been reinforced with new evidence and developed.

During their study, the researchers monitored the waves with different periods from 2 to 33 hours. These waves move in the Earth’s atmosphere at a speed of about 1.1 thousand km / h, resulting in a kind of “chess” pattern, which is associated with the propagation of waves.

Currently, researchers are preparing to find out what is the cause of these “sound” waves.