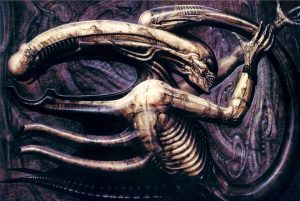 Scientists believe that our first encounter with extraterrestrial life is likely to look very different from what is usually shown in the movies.

One of the most likely scenarios is the discovery of tiny fossils in rocks from other planets. To do this, engineers from the University of Hawaii at Mānoa have developed a portable device called the Biofinder.

This apparatus is capable of isolating organic remains in fossils tens of millions of years old. And if you take Biofinder on board the next rover, it can significantly speed up the detection of traces of extraterrestrial life.

Biofinder shines through fossils with a special laser and activates fluorescence in all organic materials: amino acids, proteins, lipids and microbes. The results are recorded on video in real time at 20 frames per second, which allows you to literally scan the rocks on the go.

The technology for capturing fluorescent signals of various ranges is not something new or revolutionary, however, all previously used instruments were not as compact as the Biofinder.

“Biofinder is the first system of its kind. Currently, there is no other equipment that can detect the smallest particles of biological residues in the stone during the daytime.

“Additional advantages of Biofinder are that it works from a distance of several meters, shoots video and can quickly scan a large area,” says Anupam Mishra, lead tool designer and study co-author.

The development team tested Biofinder on a series of fish fossils ranging from 34 to 56 million years old. The instrument successfully captured biological residues in the samples, which was confirmed by analysis using larger laboratory equipment.

This ability could have some pretty important uses, including the discovery of alien life, scientists say. Mars rovers such as Curiosity and Perseverance have found plenty of evidence that Mars was once potentially habitable, but so far have not been able to find any direct signs of life, past or present. And here Biofinder would be most welcome.

A team of scientists is currently applying to NASA to consider using the Biofinder for future missions.