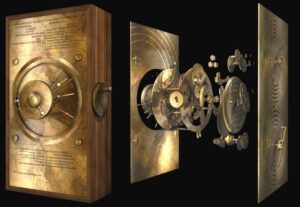 It is now believed that the mysterious ancient device may have first started working on December 22, 178 BC.

Scientists consider this device one of the most important archaeological discoveries in history. This strange 2000 year old mechanism is believed to be a form of early astronomical computer.

How the ancient Greeks developed the device, which is filled with a mind-boggling array of bronze gears, remains a mystery – especially given the time period in which it was created.

Originally retrieved from a wreck by divers, the mechanism was found alongside a variety of other artifacts, including coins, jewelry, pottery and statue fragments.

Since its discovery, the device has been the subject of intense study and debate, with archaeologists trying to piece together its purpose and origin.

The researchers speculated that a solar eclipse combined with the next day’s winter solstice—both astronomically significant events at the time—would make an ideal time to trigger the mechanism.

According to the researchers, this is a “characteristic, important and easily detectable” date for the start of the Antikythera mechanism.

While this conclusion is certainly intriguing, other experts are unsure if this date is accurate. For example, if a particular start date was correct, then other seasons and dates displayed on the device would be inaccurate.

A fish with human-like mouth sets social media on fire