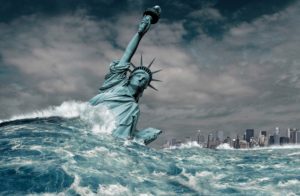 An international team of scientists found that with the complete melting of sea ice around Antarctica and the concentration of carbon dioxide in the atmosphere, remaining at 400 parts per 1 million, over the course of a century, sea level will rise by 23 meters.

However, now the concentration of carbon dioxide has reached 415 parts per 1 million, reports the “Nature”.

Scientists believe that the climate will change in the near future and become the same as three million years ago in the Pliocene era. The extensive melting of the Greenland, West Antarctic and sea ice of Antarctica will lead to an increase in sea level of about 20 meters.

It turned out that during the Pliocene era a gradual warming of the climate took place, and sea level periodically rose to an average of 13 meters, and to a maximum of 25 meters. During this period, the Antarctic glaciers had a great influence on sea level rise.

The warming that is happening now has no connection with changes in the amount of sunlight, since it has not changed lately. Climatologists believe that the current warming is caused by anthropogenic emissions of carbon into the atmosphere.

Moreover, its concentration has record values over several million years.

A ‘Vintage-UFO’ flew over a Polish village: a local resident managed to capture it