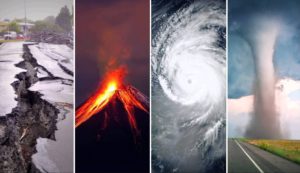 2020 began with devastating wildfires across Australia, but even by the end, things haven’t gotten much better. Storms have erupted over the Atlantic, massive wildfires have engulfed California, Africa is suffering from severe drought, and Asia is suffering from flooding. Each continent is “under attack”.

Scientists attribute the increasing intensity of these events to a changing climate, believing that nature is sending us a warning. According to Adam Smith, a NOAA researcher, due to climatic cataclysms “this year has really been disastrous.”

Inger Andersen, director of the United Nations Environment Program, added that “nature is sending us a signal.” “And it will be better if we hear him,” she said.

Despite the COVID-19 pandemic, which halted human activities in almost the entire world, emissions continue to rise, according to a recent report from the UN, the World Meteorological Organization and other scientists. In particular, we are talking about the three main greenhouse gases – methane, nitrogen oxide and carbon dioxide.

Scientists have previously suggested dimming the sun to combat climate change. This will help reduce the likelihood of a zero-day drought when the world runs out of clean water, the researchers said.