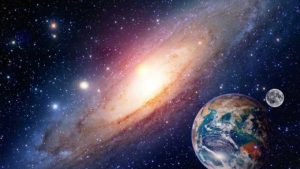 According to recent statements by scientists, the mystery of dark matter will soon be revealed.

Specialists are one step away from the discovery of the fifth force, the most complex and incomprehensible. It will help to find out the nature of all the oddities occurring in space.

At the moment, everyone knows 4 forces: gravity, electromagnetism, as well as two types of nuclear interactions (strong and weak). Available knowledge does not explain 90% of all the anomalies that are observed in space.

Scientists note that black matter makes up 95% of outer space. There is practically no information about it, so the mysteries of the universe remain unsolved.

A team from the Institute for Nuclear Research which is related to the Hungarian Academy of Sciences volunteered to discover the fifth force.

A group of scientists is led by physicist Attila Krashnahorka. After numerous studies, the existence of a subatomic object called X17 was presented. The properties of the particle correspond to those that the fifth force should have.

According to experts, thanks to the dark matter the Universe is expanding.

Space is expanding, although the force of gravity, it would seem, should narrow it. This is the most important mystery that can be solved with the identification of the fifth force.

Relic hunter unearths ‘witch jar’ with hair and teeth inside