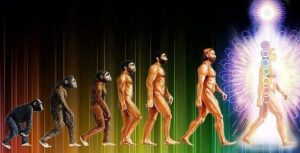 What if I told you that in 1000 years, we will look like petty cavemen in our current physical and mental state compared to future humans? There is an overwhelming amount of scientific evidence that proves that not only are our physical bodies evolving at an accelerated rate, our consciousness is as well.

We are indeed in the evolutionary fast lane, and perhaps we are witnessing the prophecies of apotheosis in action. Our consciousness and bodies are evolving at a rate never seen before in the history of the earth.

We can look around the world and see the signs of dramatic spiritual evolution as we continue to actualize our fullest potential. There is an awakening happening right now, and December 21st 2012 really did mark the dawn of a new age of enlightenment. But as this global awakening is happening, our physical vehicles and intelligence levels are also evolving as we step into the light of this new age.

In 2007, Dr. John Hawks, professor of anthropology at the University of Wisconsin-Madison, published an article in the peer-reviewed journal Proceedings of the National Academy of Sciences (PNAS) titled “Recent acceleration of human adaptive evolution”.

This article showed that positive selection within human beings has occurred at a rate 100 times higher than any other time in human history, and that this massive acceleration within evolution has happened particularly within the last 5000 years(3).

The study specifically looked for DNA sequence variation known as SNPs which are mutations at a single point on a chromosome. As indicated in Health and Medicine Week, “The researchers identify recent genetic change by finding long blocks of DNA base pairs that are connected.

The researchers concluded that as the population of human beings continues to increase, the acceleration effect of evolution has also increased because of the amount of room there is for new mutations to occur and be passed throughout the population. According to the original journal article publication, approximately 1800 genes, or 7% of our entire genetic system, have experience recent positive selection.

They add that “To the extent that new adaptive alleles continued to reflect demographic growth, the Neolithic and later periods would have experienced a rate of adaptive evolution >100 times higher than characterized most of human evolution”(5).

With the cultivation of agriculture, the constant changes and experimentation in diet (such as the adaptive tolerances to lactose in milk), the exposure to diseases (such as the introduction of the CCR5 gene to make people resistant to AIDS), and the massive spike in human population within the last 10,000 years, nature has been presented with the optimal breeding grounds for positive selection and new adaptive mutations in the introduction of a massive gene pool and constantly changing environments.(6)

For example, in only the past few millennia, Europeans have experienced rapid changes in the gene for a protein that transfers potassium ions in and out of taste buds and nerve cells, as well as changes in genes associated with Alzheimer’s disease and even cancer.(7)

John Hawks’ boldest of claims was recorded on the University of Wisconsin-Madison website, where Hawks says: “We are more different genetically from people living 5,000 years ago than they were different from Neanderthals.”(8)

In other words, if you take a human being from 3000 BC such as an ancient Egyptian, you will find that they are more similar to Neanderthals in terms of their genetics than they are to us.

Anthropologist and geneticist Dr. Henry Harpending from the University of Utah also participated in conducting this study, and told National Geographic that “If humans had always evolved at this rate, the difference between modern humans and chimps should be 160 times greater than it really is.”(9)

There is a vast body of empirical evidence that suggests that human beings have recently been the subjects of accelerated natural selection within genetic information.

There is also evidence that this recent acceleration in evolution is not only biologically physical, but is also mental in terms of intelligence. J.R. Flynn, professor of political science at the University of Otago in New Zealand, discovered that IQ scores across the globe have went up 3 points on average per decade for each decade for as long as IQ test scores have been recorded (which has been since 1910 in the United States).

This means that someone that scored in the top 10% on the IQ test 100 years ago would now been in the weakest 5%. These increases have been occurring at a steady rate amongst both male and female genders and have been empirically verified in over 20 countries(10) (see Figure 1).

The average IQ score has always been set to 100, so if a person passes the IQ test with a score of 130, they are among the higher end of performers, and a score of 80 would deviate far from the average raw score. What is striking is that IQ scores have had to be continuously made more difficult over the last century to keep the mean score at 100.

Flynn discovered that the greatest differences were found in culturally reduced tests and fluid intelligence. Fluid intelligence is the ability to think rationality, abstractly, and find solutions to novel problems independent of acquired knowledge.

He makes adamant the fact that these are not learned-content gains through more information being accessible to people, as this would only reflect crystallized intelligence regarding the application of learned knowledge (11).

And furthermore, other environmental factors such as more education and better economic situations are impoverished when trying to adequately explain the gaps in some of the cases, such as the increase in IQ scores by a total of 20 points in 30 years by the Dutch. 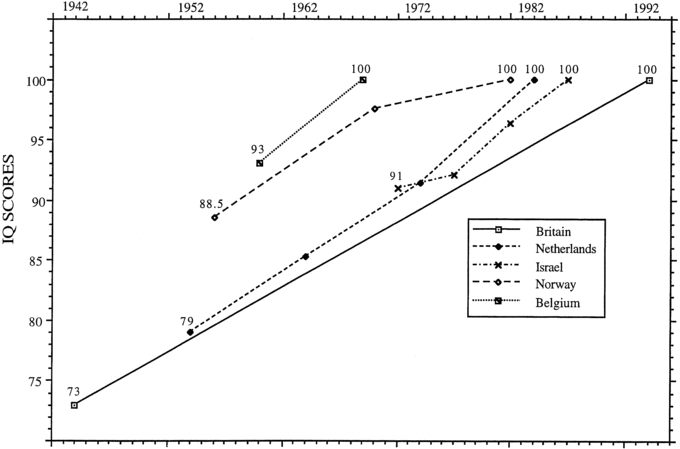 As Flynn states in one of his original papers “The international data fall into the same pattern as the American data. Gains are about 18 IQ points per generation (30 years) on Ravens, somewhere between 9 and 18 points on Wechsler and Stanford–Binet tests, about 9 points on purely verbal tests, small or nil on Wechsler subtests such as arithmetic, information, and vocabulary”(12).

The Ravens test measures reasoning abilities using abstract objects independent of language, writing, and reading. This means that these test increases are not a result of people having more access to knowledge and information, but shows that on the contrary, the most significant results were indicated in testings that involve pure problem-solving intelligence, such as identifying non-verbal patterns and relationships.(13)

Environmental impacts that can explain these increases in IQ scores have yet to be identified, and are still being speculated upon.

These are some of the most important discoveries in psychology, which Flynn calls “a cultural renaissance too great to be overlooked”(14).

Contrary to some of the scientific consensus, human evolution is undergoing dramatic increase in terms of genetics and intelligence. We now have scientific proof that evolution is not merely a matter of cultural ingenuity and social conditionings.

Nor is it exclusively reserved for physiological adaptation, but is in fact a concrete measurable phenomenon in human psychology that happening within our species right now.

Evolution can now be spoken of in something that is currently in a state of progression towards complexity, as we have seen from the evidence of geneticists and psychologists alike.

Is this accelerated state just one random hiccup that will plateau in the near future? Will we continue to evolve at this exponential rate from this point forward? Are we witnessing the physical manifestation of the ancient prophecies of human apotheosis in action?

This area remains ripe for investigation, and insofar as the conditions in which this evolution is occurring remain present (population increases, environmental changes, technological and intellectual refining) we should see this effect sufficiently sustained as we enter this new age of evolution and continue to explore this exciting frontier.

In 1000 years, we will be literal gods in comparison to our current state. We will have technologies and abilities that we could only dream of right now, and our bodies will be so much more evolved that we will look back a millennium and wonder how ancient man lived such primitive lives with such archaic bodies.

Maybe we really are entering the Golden Age of spiritual and physical evolution that so many ancient cultures spoke of.