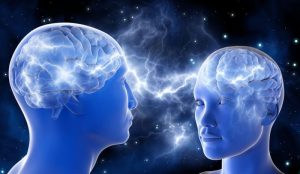 When it comes to psychic abilities, many people scoff at the idea that we can sense things without the use of the traditional five senses.

Scientists and skeptics are insistent upon cold hard facts and evidence when discussing any topic—particularly anything related to psychic phenomena. Yet, you may be surprised to know that the concept of telepathy has actually been validated by some scientific studies.

Telepathy is the transmission of information from one person to another without the use of traditional physical or sensory means. Sometimes called mental telepathy, it is the communication between the minds of two people.

Many of us experience telepathy without even realizing it. Have you ever thought about someone and shortly afterwards they call you? Or when the phone rings, do you already know who it is and why they are calling?

People with a strong emotional bonds are likely to possess telepathic powers experiencing twin flame telepathy during separation. Many times a mother knows when her child is sad or hurting even when miles away. These are just simple examples, but important nonetheless.

With the advent of modern psychology in the 19th century, interest in the mind led to the investigation of all sorts of topics and phenomena. In many cases the idea of telepathy was associated with delusions and schizophrenia. Communication from someone or something outside the mind was akin to abnormality. Any situation beyond that was left to the realm of parapsychology and pseudo science.

However, one of the most famous early studies took place in the 1937 according to Wikipedia. It was conducted by author Harold Sherman and explorer Hubert Wilkins. Sherman was residing in New York while Wilkins was off exploring the Arctic. Every day for five months they each sat down at the end of the day and would write down their thoughts and reactions.

About 75 percent of the time, they would pick up correct impressions from each other. One notable example involved Wilkins attending a formal military ball in Canada. That very night Sherman wrote that he saw Wilkins in formal evening dress surrounded by important people engaged in conversation.

To satisfy the skeptics, Sherman and Wilkins sent their notes to independent scientists every day. And of course being over 2,000 miles apart left little room for cheating. How else can one explain the high percentage of accurate writings other than telepathy?

Another interesting experiment was conducted in the early 1970’s by astronaut Edgar Mitchell. Although not authorized by the U.S. Government, Mitchell was able to communicate telepathically with those aboard the Apollo 14 spacecraft, thus proving distance is no barrier to telepathy.

Despite the success of the Sherman-Wilkins experiment, the skepticism remains. Even today, studies in this field continue. Since the early 2000’s Dr. Paul Stevens conducted research in Scotland at Edinburgh University among couples that were emotionally close.

Using video recordings, one partner would relay a message mentally to the other about what they had seen on the videos. A high percentage of the receivers were able to pick up what their partners saw.

Another prominent researcher in this field is Dr. Rupert Sheldrake. An English biologist and author, he has spent much time investigating telepathy. He has studied telephone telepathy (where someone calls after you’ve been thinking about them), telepathy between mothers and children, and even email telepathy.

Although mounting evidence points to the existence of telepathy, the skeptics will remain. Perhaps that is a blessing as it gives brave researchers the impetus to go on studying and revealing exciting finds in the realm of psychic phenomena.

The Entire Universe Is Intelligent, Our Every Thought Is Connected With Distant Worlds