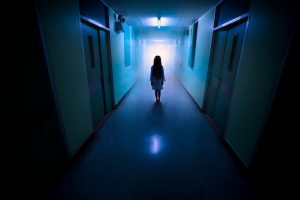 Back in 1983 my dad had a job taking care of a school, getting it ready for the next school season. My friend Dave and I decided that after helping my dad that day we would stay the night in the school instead of going back home and we had an early date with our girlfriends the next morning. So instead of making a trip longer than we had to we thought it was a good plan.

So we locked up the school and went to the small diner in this town of 300 or so, got some dinner and headed back to the second story library to eat and watch a little TV. It was dark outside and a thunderstorm was brewing. Dave wanted to go to sleep and I decided to watch a little late show before turning in.

The lights are all off except for the TV and the school is built with the main staircase in the middle of the building, now lightning is walking the walk and thunder is talking the talk outside. Then IT started.

On the second floor we heard a locker slam, then another and then four more, not loud but enough to be heard above the TV. I start to think it’s my brother who got the set of keys from my dad and was screwing around. But Dave is freaking out and wants to leave. So I stick my head out the door and look straight down the rest of the building and in the emergency lights glow I see nothing.

As I closed the door another locker was shut. With the storm making it’s presence known Dave talked me into leaving.

Since he didn’t have to twist my arm twice, we gathered our stuff and stood by the door, getting enough courage to make a run for it, so we count to three and it’s every man for himself. We ran through the hall and start down the stairs with the sounds of about ten lockers closing behind us.

We hit the first floor and we start heading for the back of the building where the car was parked as we finally hit the back door and it slammed open a bolt of lightning hit the ground in front of us about 50 feet away.

So as we figured only the two of us were the only ones there we figured we could scream as loud and girly as possible and none would be the wiser. We got in the car and got home where my brother was home playing a video game, and dad asking “What are you doing here?”

Poltergeist Wanted To Take My Son