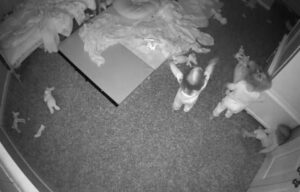 At the end of January 2021, three little triplet girls woke up in their bedroom at night and saw something on the wall that they first tried to talk to, and then tried to hit him and threw toys at him. The girls’ mother was very scared.

5-minute footage of the baby monitor (see video below) in the room of three little triplet girls was posted online the other day. In the middle of the night, the girls woke up from something and climbed out of their beds, and then saw something on the wall or near the wall.

The girls screamed in fear, then pointed their fingers at the bare wall and talked to this invisible creature. 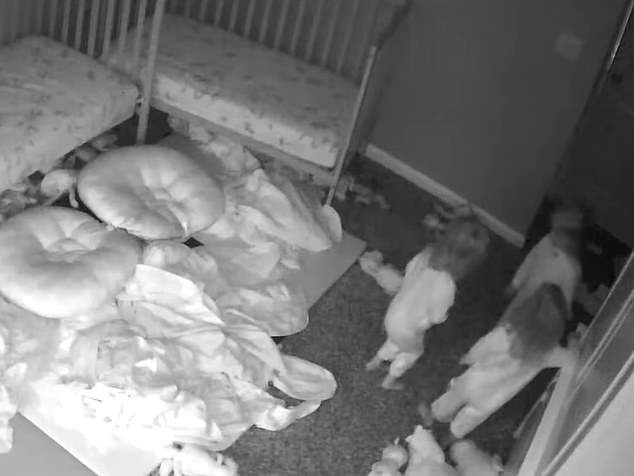 When the girls’ mother watched this video, she was terribly frightened and began to ask the children about what they saw. But the girls were able to tell only that they saw the “monster” and did not give any details about how he looked or what he did.

Presley’s girls , Millie and Hayes Nichols are 2 years old and live with their parents in Georgia. Everything recorded on video happened on the night of January 26, 2021, but this was only the beginning.

According to their mother, Caitlin, after this incident, they woke up again in the middle of the night and claimed that they saw the monster again in the same place against the wall.

In the video, you can hear one of the girls saying the words “in your face” to the invisible being. Perhaps the girl says she wants to punch the monster in the face, since after that the triplets began to run from wall to wall. And then they all three tried to hide from the monster behind the closet.

During the 5-minute incident, the triplets repeatedly point their fingers at an empty wall, and some of them even try to shake their fists at the wall.

According to journalists, at some point you can clearly hear how one girl looks at the wall and shouts “Do you like our beds?”, And then another shouts to the wall “You have a problem!”

In general, the monster does not seem to scare children much, at some point the girls acted as if they were having fun. At the end of the recording, the triplets lost interest in the wall (probably the monster or ghost had left) and began to play among the scattered pillows on the carpet.

The girls’ mom, having watched the frightening video several times, eventually chose to think that her triplets were just starting the “imaginary friend” period and that it was all just their imagination.

However, she admitted in an interview that this is not the first frightening incident that occurs in the bedroom of her babies. Previously, something incomprehensible happened at night with the girls’ toys.

When this video became popular on the web, users were divided, some were convinced that children were just playing, others began to write that when young children play, they very rarely shout to “imaginary friends” such words as “in your face” or “You have a problem!”. In addition, this did not happen during the day, when noisy and active games are common, but in the middle of the night.

As for the third group of users, they noticed that in the monitor lens of the baby monitor, you can also see a very fast “flying white ball” (orb) that regularly flies through the room throughout the video.