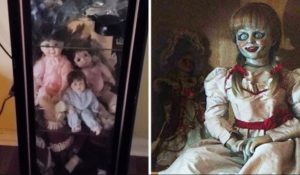 Did you see “Anabelle,” a horror movie featuring a scary, possessed doll? Well, while we’re definitely scared to watch the movie on our TV screen, one man gets scared to watch “haunted” dolls moving in his own house.

And no, this isn’t a low-budget horror movie; it’s actually happening to him in real-life. According to Unilad, a man from Ohio claims that his wife’s porcelain dolls are moving in a glass cabinet on their own, and he’s kinda got a video to prove it.

“I’m still a little shook. I went to my bedroom and was looking at the door, waiting for that m*****f***e* to bust through it. This is the second time this [has] happened now. Last time was just the doll [that moved]. And now a completely different doll is moving and clothes just fall off the couch. It only happens when I’m here by myself,” Chad Gassert was quoted by Unilad.

As seen in the video, the dolls moved moving two different directions. One doll, positioned next to two others, suddenly leans against the glass. Then the smaller one in a blue dress drops its head towards the left.

Man claims his first ‘paranormal experience’ with the dolls happened in January when one of them shifted position from across the room. The footage shared on social media is of the second occurrence.

After Chad posted the footage online, naturally, people could witness the paranormal happening as some of them even claimed to see a ‘pair of eyes’ behind the dolls just before they moved and a couple also said they saw the doll ‘sit straight back up’.

The video has now become a topic of discussion on social media.