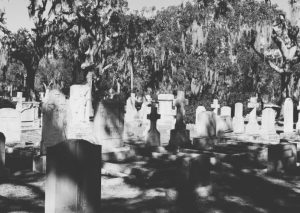 Read about three paranormal phenomena that have been witnessed in the cemetery. Each case offers a theoretical parapsychological explanation as to what it could be.

In 1771, the land was where the family manor house of John Mullryne and son-in-law Josiah Tattnall was on. Twice in thirty years, the plantation house burned down. During one of the fires, a dinner party was moved to the lawn so the conflagration didn’t spoil the occasion.

The plantation served as a hospital for French troops who were trying to capture Savannah from the British. Josiah Tattnall, Jr.’s wife, Harriet, was the first adult to be buried on the grounds next to her four children in 1802.

Peter Wiltberger bought some of the land in 1846. Seventy acres was transformed into the Evergreen Cemetery in 1868. In 1907, the graveyard was bought by the city of Savannah and renamed Bonaventure Cemetery.

People have heard phantom voices of people talking and enjoying themselves, having a good time. This is a haunting, energy imprinted on time and space, like a tape recording. The phenomenon is repetitious and has no intelligence.

Usually, these hauntings are caused by traumatic experiences. The voices are probably an eerie reenactment of the dinner party that was moved outside when the mansion was burning.

Gracie Watson died when she was a young girl and was buried in the graveyard. There is a life size statue of her. Many people who visited the cemetery left trinkets and other presents in its lap.

When a gift is stolen, the statue cries and weeps tears of blood during the night. Witnesses have heard sounds of a female crying and have sensed a feeling sadness in the vicinity.

In addition, people have reportedly seen the statue shed blood colored tears. There have been documented cases of weeping statues. The most common reported one is St. Mary, mother of Jesus.

Her statues have been witnessed shedding tears in Catholic churches and cemeteries and in their homes. While scientists found natural causes in some statues, others had none and were considered miracles.

People have reported hearing, but never seeing, a pack of phantom dogs barking, growling and breathing in the graveyard. Some have said they have felt as if they were being chased by them and were terrified.

The spectral canines, although ghostly sounds of their running left no paw prints behind. This could be a haunting, like the ghostly dinner party or apparitions.

The pack could be an apparition which can be heard and is believed to be the part of a person or animal that survives death of the physical body.

It’s believed that apparitions have intelligence and, for the most part, a purpose. It’s possible that the dogs lived on the grounds and their specters are protecting their own territory.