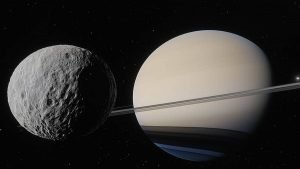 A group of scientists came to the conclusion that the lunar satellite of Saturn called Mimas, which was discovered more than two hundred years ago by the German astronomer William Herschel, in theory, can hide an entire ocean of water under its surface.

The results of scientific work were published on the pages of the journal Newscientist.

This seems surprising, since the satellite itself is not an object on which, in principle, liquid water can appear.

However, the calculations of scientists say otherwise. A simulation by American scientists shows that an impressive ocean of liquid water is hidden under the upper crust of the lunar satellite.

The scientists were prompted to such an assumption by the Cassini spacecraft, which recorded a movement that was not characteristic of the satellite – it seemed to be shaking relative to its own orbit. Scientists said that such an anomalous movement indicates that there is an ocean in the depths of the object.

A team of American scientists conducted a thermal calculation that confirms the presence of water in the depths of Mimas.

It was possible to hide this fact due to the absence of cracks and melting of ice on the surface of the lunar satellite of Saturn. This fact distinguishes Mimas from similar space bodies, in the depths of which liquid water is formed.

According to scientists, at a depth of 25-30 kilometers, Mimas has a heat source that maintains the liquid phase of the ocean.