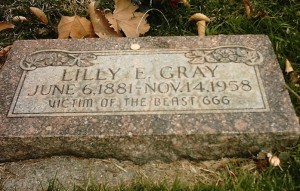 The legend, a synopsis: In the Salt Lake City Cemetery, there is a gravestone for a woman named Lilly E. Gray with an inscription that reads, “Victim Of The Beast 666”. Many people have attempted to research this stone and Lilly, but strangely always hit a brick wall, as there is no information aside from her obituary, which states only that she died in a local hospital from natural causes.

Within the sublime Salt Lake City Cemetery, there is indeed a gravestone which has aroused interest and curiosity over the years, and has recently, with the advent of the internet, become the object of intrigue and fascination, amateur and oftentimes apathetic sleuthery. The stone is modest- a small, flat marker; the inscription is anything but: “Victim Of The Beast 666”.

Cemetery legends abound. These stories, more often than not, especially when pertaining to specific gravestones and their inhabitants, tend to take on the attributes of the urban legend, mirroring societal fears, horror, and capitalizing on mystery; they usually have an associated thread of religious intrigue, including ‘devil worship’. The legends also tend to arise from the most benign origins.

Part of the fascination with the Lilly E. Gray mystery could be due to its “legend in reverse” quality. The impetus is its blatant-ness, its in-your-face refence to satan, then an unravelling reveals “nothing”. The strange lack of any story associated with Lily Gray’s gravestone is its biggest mystery and also the not very festive centerpiece its own developing, unique legend.

The stone’s astonishing, provocative inscription begs for interpretation and meaning; where are all the suppositions? They are few, certainly. There are a couple websites that allude to the use of stone’s image within a report by investigators of satanic ritual abuse hysteria. There are a few jokes in a thread about Lilly’s husband perhaps being the ‘beast.’

Salt Lake City is home of the massive LDS-operated Family History Library, and the world’s geneaological research mecca–since the stone’s erection in 1958 no one has dug deeply enough to uncover even a minimal account of Lily Gray’s life and the origins of the inscription? When confronted with apparent true lunacy, evil, religious ferver, abuse, or implausible as it may be, ultimate victimhood at the hands of satan (as the stone literally implies) do we collectively turn our heads?
Source: associatedcontent.com