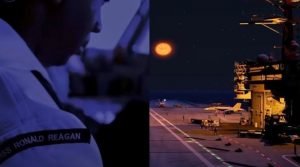 According to witnesses who were on the nuclear-powered Nimitz-class supercarrier that fateful night, a roughly 20 to 40-foot wide, luminous round object suddenly showed up and began to hover over the ship’s flight deck.

Karol Olesiak who was a 3rd class petty officer and Quartermaster on the Ronald Reagan at the time of the incident told The Debrief that when he arrived to relieve the previous watch that evening, the outgoing Quartermaster of the Watch indicated something was already going on at that time, though the individual offered no additional information.

However, it soon became apparent to Olesiak that something was happening outside above the flight deck.

“I’m pretty sure ‘it’ was there,” Olesiak said. “And they were like, ‘I don’t know what that is. I don’t care.’ You know what I mean? Like they had an attitude like ‘I’m going to my rack. I don’t care. … don’t even bother me about this shit’… So this ‘thing’ is there, the entirety of my watch and because the officers are ignoring it, I’m forced to ignore it.”

Olesiak said he saw a large round and orange-colored glowing object with a fiery surface hovering about 100 feet above the flight deck.

He said he viewed this object directly through the windows on the bridge at eye level. Olesiak says the surface of the object reminded him of biblical descriptions of the “burning bush”.