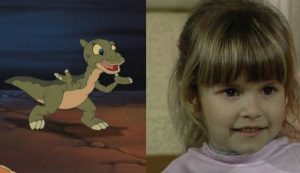 American child actress Judith Eva Barsi was born on June 6, 1978 and was the only child of Jozsef Barsi and Maria Benko. Judith was discovered at a San Fernando Valley skating rink in 1983 when the then five and a half year old was mistaken for a 3 year old, and her first role was in Fatal Vision, playing Kimberley MacDonald.

She went on to appear in more than seventy commercials, the first one being for Donald Duck Orange Juice. As well as her career in television, in which she made appearances in a number of series, she also appeared in several films, including Jaws: The Revenge, and provided the voices of Ducky in The Land Before Time, and Anne-Marie in All Dogs Go to Heaven.

As she was short for her age (she stood 3 ft 8 in (1.12 m) at age 10), she began receiving hormone injections at UCLA to encourage her growth. Her petiteness led casting directors to cast her as children that were younger than her actual age. Her agent was quoted in The Los Angeles Times as saying that when she was ten, “she was still playing 7, 8”.

Her mother Maria was the main thrust of her career as a Hollywood starlet, but also took great pains to try to give her a normal, happy childhood.

But this happy childhood did not last long. Beginning in 1985, Judiths Father Jozsef would often be home drunk instead of working as a plumber, and he refused to let his wife Maria work. As a result the family briefly went on welfare until Judith’s career took off in 1986 and 1987.

By the time she started fourth grade, Judith was earning an estimated $100,000 a year, which helped her family buy a three-bedroom house in West Hills, Los Angeles.

As her career soared, her father became an increasingly abusive recluse who constantly threatened to kill his wife and daughter. His alcoholism continued to worsen, causing the police to arrest him on three separate times for drunk driving.

In December 1986, Maria reported his threats and physical violence toward her to the police, buy as the police found no physical signs of abuse, she decided not to press charges against him. After this incident with police, József Barsi reportedly stopped drinking, but continued to threaten Maria and Judith.

His various threats included cutting their throats as well as burning down the house. The violence and abuse, continued, even if his drinking had stopped, with Judith telling a friend that her father threw pots and pans at her, giving her a nosebleed.

After breaking down in front of her agent during a singing audition for All Dogs Go to Heaven, Judith was taken by her mother Maria to a child psychologist, who identified severe physical and emotional abuse and reported her findings to Child Protective Services.

The investigation however was dropped after Maria assured the case worker that she intended to begin divorce proceedings against József and that she and her daughter were going to move into a Panorama City apartment she had recently rented as a daytime haven from him. Friends urged her to follow through with the plan, but she failed to do so.

Judith Eva Barsi was last seen riding her bike on the morning of July 25, 1988. That same evening, József went to Judiths bedroom, and put a .25 caliber pistol behind her ear while she was sleeping and murdered her from point blank range in her bed whilst she slept. He then shot and killed his wife Maria in the hallway, as she ran to her daughters aid.

He spent the next two days wandering around the house and told Judiths agent the next night that he intended to move out for good, and just needed time to “say goodbye to my little girl.”

He then proceeded to pour petrol on the bodies of Judith and Maria and set them alight. After incinerating the bodies, he went to the garage and shot himself in the head with a .32 calibre pistol. 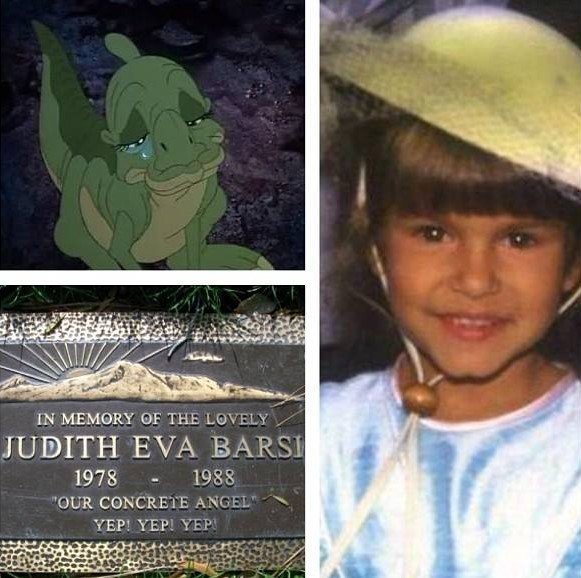 On August 9, 1988, Ten-year-old Judith Eva Barsi and her Mother Maria were interred at the Forest Lawn Memorial Park in Los Angeles.

Judiths final film, All Dogs Go to Heaven, in which she provided the speaking voice of Anne-Marie, was released in November 1989. The end credits song “Love Survives” was dedicated in her memory.