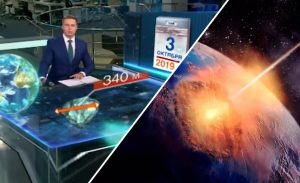 This cosmic body, 340 meters long, was discovered by scientists back in 2007. The asteroid was given the name 2007 FT3. Then, according to astrophysicists, this space giant did not pose a threat to our planet.

However, a few days ago, the 2007 FT3 suddenly changed trajectory, moreover, it significantly increased the speed. And now he flies straight to Earth. Why an asteroid suddenly changed its course of flight is unknown.

If a giant asteroid really crashes into Earth, the consequences of it will be equivalent to an explosion of 100 million modern nuclear warheads.

Approximately something similar happened on Earth tens of millions of years ago, destroying the world of dinosaurs.

According to astrophysicists, if nothing changes, then 2007 FT3 will collide with the Earth on October 3 of this year, reports Russian news agency.

However, only the Russian news agency reported that the asteroid changed its trajectory. So far no official NASA statement has been made about this.