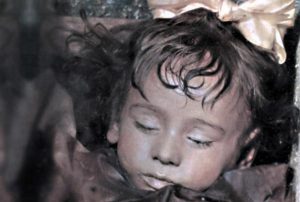 Rosalia Lombardo (December 13, 1918 – December 6, 1920), was an Italian child who passed away of pneumonia. Rosalia’s dad, Official Mario Lombardo, was sorely grieved after her death, so he approached Alfredo Salafia, a noted embalmer, to preserve her. Her body was one of the last corpses to be admitted to the Capuchin catacombs of Palermo in Sicily.

Thanks to Salafia’s embalming techniques, the body was well preserved. X-rays of the body show that all the organs are remarkably intact. Rosalia Lombardo’s body is kept in a small chapel at the end of the catacomb’s tour and is encased in a glass covered coffin, placed on a wooden pedestal.

A 2009 National Geographic photograph of Rosalia Lombardo shows the mummy is beginning to show signs of decomposition, most notably discoloration. To address these issues the mummy was moved to a drier spot in the catacombs, and her original coffin was placed in a hermetically sealed glass enclosure with nitrogen gas to prevent decay. The mummy so well-preserved that you might even think she’s alive… especially when she blinks at you.

Rosalia’s preservation is only part of the reason that she remains such a popular attraction. Now, almost an entire century after her death, visitors say that Rosalia actually blinks her eyes inside her glass coffin. Recently captured time-lapse photos appear to show her eyelids eerily opening and closing, her blue eyes undamaged and glistening in the catacomb lights.

In the video below, time lapse shows her eyes open slightly and then close again over a period of two hours.

While numerous theories about “Sleeping Beauty” and her mysterious winking performances have flooded the internet, from those who believe the little girl’s restless spirit still resides in her pristine body, to those who blame the changing humidity catacombs for the strange phenomena, nearly all who view her can agree that she truly is one of the most stunning mummies in the world.