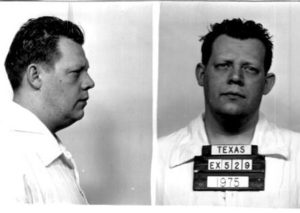 Ronald Clark O’Bryan, nicknamed The Candy Man and The Man Who Killed Halloween, was an American killer who murdered his own eight-year-old son Timothy on Halloween 1974 with potassium cyanide laced Pixy Stix in order to claim life insurance money to ease his own financial troubles, being over $100,000 in debt at the time.

The infamous crime earned him the nickname, “Candy Man.”

He also was given the nickname as the Man Who Killed Halloween, when attorney Michael Hinton claimed that the actions of O’Bryan had ruined Halloween for little kids for years all over the United States, an opinion most likely echoed by concerned parents across the whole country.

On Oct. 31st 1974 neighbours O’Bryan and Jim Bates, of Deer Park, Texas, took their children out trick-or-treating in a Pasadena neighbourhood. Later that night, Timothy O’Bryan would die from eating poisoned candy. It was later found that his father was the culprit.

Bates said that he would wait on the sidewalk while O’Bryan would go up to the doors with the children. After visiting a home where the occupants failed to answer the door, the children grew impatient and ran ahead to the next home while O’Bryan stayed behind.

He eventually caught up with the group and produced five 21-inch Pixy Stix which he claimed that the residents of the house had given him for the children when they had answered the door.

O’Bryan gave two of the Stix to his neighbours two children and one each to his own children Timothy and Elizabeth. Upon returning home, O’Bryan gave the fifth piece of candy to a 10-year-old boy whom he recognised from his church.

A little later, O’Bryan made an emergency call saying that his son had eaten poisoned candy. The ambulance, which was already in the area, arrived within minutes. Timothy had eaten the Pixie Stick, which had cyanide in it. He died later that night.

After an investigation, O’Bryan was charged with the murder of Timothy. Earlier in the year, O’Bryan, who had a history of fraudulent insurance claims, took out large life insurance policies on his children.

The various policies totalled approximately $60,000. His plan was to murder his own children, to collect the money and also to kill other children in the process to make it look like someone else had done it.

According to a pathologist who tested the Pixy Stix, the candy consumed by Timothy contained enough cyanide to kill two adults while the other four candies contained dosages that could kill three to four adults.

Although the police never discovered when or where O’Bryan bought the poison,he was indicted for one count of capital murder and four counts of attempted murder. During the trial, a chemist who was acquainted with O’Bryan testified that in the summer of 1973, O’Bryan contacted him asking about cyanide and how much would be fatal.

A chemical supply salesman also testified that O’Bryan had asked him how to purchase cyanide. Friends and co-workers testified that in the months before Timothy’s death, O’Bryan showed an “unusual interest” in cyanide and spoke about how much it would take to kill a person.

O’Bryan’s sister-in-law and brother-in-law testified that on the day of Timothy’s funeral, he spoke of using the money from Timothy’s insurance policy to take a long vacation and buy other items.

On June 3, 1975, a jury took just 46 minutes to find O’Bryan guilty of capital murder and four counts of attempted murder. The jury took 71 minutes to sentence him to death. Shortly after he was convicted, his wife filed for divorce. She later remarried and her new husband adopted her daughter Elizabeth.

After being found guilty, O’Bryan, dubbed the “Candy Man”, appealed his case several times, twice to the Supreme Court. All appeals were rejected.

On March 31, 1984, after asking for “God’s forgiveness of us all,” O’Bryan was administered a lethal injection. He was pronounced dead at 12:48am. During the execution, a crowd of 300 demonstrators gathered outside the prison cheered while some yelled “Trick or treat!”.

The Strange Life Of Schlitzie – The Sideshow “Pinhead”