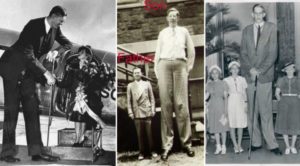 Robert Wadlow was born to Addie Johnson and Harold Wadlow in Alton, Illinois, on February 22, 1918, the eldest of five children, and was to become to be known as the Alton Giant and the Giant of Illinois, becoming famous as the tallest person ever in human recorded history.

By the age of 8 he was already taller than his father who was 5ft 11″, and in elementary school they had to make a special desk for him due to his size. By the time he had graduated from Alton High School in 1936, he was 8 ft 4″. After graduating he enrolled in Shurtleff College with the intention of studying law.

Wadlow’s size began to take its toll however, and he required leg braces to walk and had little feeling in his legs and feet, but despite these difficulties, he never used a wheelchair.

Wadlow became a celebrity after his 1936 U.S. tour with the Ringling Brothers Circus. In 1938, he did a promotional tour with the International Shoe Company (since 1966 called INTERCO), who provided him with his shoes free of charge. He possessed great physical strength until the last year of his life, when his strength and his health in general began to deteriorate rapidly.

By the time of his death at the age of just 22, Wadlow had reached 8 ft 11″ in height and weighed 490 lb. His great size and his continued growth in adulthood were due to hyperplasia of his pituitary gland, which results in an abnormally high level of human growth hormone. He showed no indication of an end to his growth even at the time of his death.

On July 4, 1940, during a professional appearance at the Manistee National Forest Festival, a faulty brace irritated his ankle, causing a blister and subsequent infection. Doctors treated him with a blood transfusion and emergency surgery, but his condition worsened due to an autoimmune disorder, and on July 15, 1940, 11 days after contracting the infection, he died in his sleep at the age of 22.

His coffin measured 10 feet 9 inches long by 32 inches wide and was 30 inches deep, and weighed 1,000 pounds which had to be carried by twelve pallbearers and eight assistants, He was interred at the Oakwood Cemetery in Upper Alton, Madison County, Illinois.