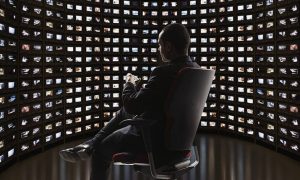 If you constantly feel like you’re being watched, odds are you’re probably right. Back in the day, you might have been suffering from paranoid delusions, but nowadays, with thousands of satellites circling the earth, cameras the size of flies recording our every move, and devices that track our every movement and passing interest chirping away in our pockets, the possibility that someone is watching you right now is pretty darn real.

What’s more, you’re not only being watched, but you’re being manipulated and judged. “They” say it’s for your own good. “They” say it’s necessary. “They” say it’s harmless. Sound familiar? Of course it does, eerily so. Today’s obsessive monitoring is a subtle version of George Orwell’s novel 1984 – a real-life Big Brother.

So if we admit that we are being watched and that the repercussions of allowing it can manifest into a dystopian future, what do we do about it? Quick answer: nothing.

I’ve thought long and hard about whether or not our world bears any resemblance to Orwell’s Oceania. For if it does, we might want to mount a counter-attack before it gets worse. And unsurprisingly, there ARE a few striking similarities between that “fiction” and our reality.

First off, there is no Big Brother, at least not in the government. The government has become far more transparent than it’s ever been, thanks to the advent of social media, the fear of WikiLeaks, and forced accountability. They’ve also become more and more ineffectual in making real change in people’s lives. There’s just too much red tape.

Still, government is responsible for empowering those that are truly Big Brother-esque. Through “fear legislation” (things like the Patriot Act) and lax regulations, government has made it easy for cell phone companies to monitor our every word and grocery stores to catalogue our most miniscule purchase. They have paved the way for others to do the dirty work.

The real people in power are the heads of multinational corporations. Although we have anti-trust laws in this country so that the richest and most powerful can’t band together and become too rich and powerful, one good look at the shrinking competition in major markets, such as banking and oil, prove these laws have failed.

Although our laws have seemed to fail us, momentarily, we always have freedom of speech right? Yes. But language too has been infiltrated, catalogued, studied, and used against us. We’ve been “trained” to listen and react to Big Brother language, the language of consumerism. It’s everywhere.

Subliminal messaging is more real than you think, and it’s just not being used by the government. Smart advertisers have it down to a science. They know the weaknesses in the human psyche and exploit it. George Lackoff’s Don’t Think of an Elephant! discusses exactly this phenomenon, the power of framing language, particularly when used in politics.

Lackoff claims that the mere use of a word brands it in our brains. If a word or idea is repeated often enough, then it becomes second nature to us, and eventually, when a conflicting idea is introduced – no matter if it’s more “truthful” – our brains reject it.

Not just that, our tech-savvy, multitasking minds have been trained to move quickly or get bored. TV sound bytes and 30-second video snippets have become our information currency.

We’ve also shortened everything into tight little phrases, a la Orwell’s Newspeak, leaving a lot of information in the dark. So if we choose to get our information from YouTube rather than a newspaper or a book, perhaps we also have a role in this “takeover.”

In Oceania, the government enslaves an unwitting populace, but the more I look at this situation, it seems we’ve wittingly agreed to much of this. We’ve done much of our own enslaving. How? Y

es, governments are cataloguing us, but they’re not doing so secretively or without our blessing. They don’t hold the keys to the information or the technology that’s doing it. They’re just using resources available to them.

If there is a Big Brother, we signed up for it. Services like Google, Twitter, and Yelp thrive on the information their users voluntarily provide. We haven’t been enslaved by some cold, faceless bureaucracy. We’ve been enslaved by Facebook of all things.

If anything, we’ve shackled ourselves. Take a good look at the Terms of Service next time you update an Apple product, rent a car, or do anything that has anything remotely to do with a giant corporation.

You’ll find that in nearly every facet of life, we’ve signed our rights away. All over the world people are giving away their privacy. They’re saying it’s okay to be watched and catalogued and judged.

There’s been no hostile takeover. It was a slow, thoughtful process facilitated by our need to be connected, all day everyday, through a multitude of bright and shiny gadgets and products. So knowing that we know now, why don’t we do anything about it?

Because although we might be powerless peons, we’re comfortable. This goes back to Jean-Jacques Rousseau’s social contract, with a dash of New World cynicism. We, the peasantry, give up a few of our rights so that our families can be protected. It’s ok to sift through all my Facebook information… if it finds pedophiles. It’s ok to keep copies of my Tweets… if it helps stop cyber-bullying.

Instead of Big Brother or the Ministries, corporations hold the proverbial conch shell. In return, they provide us with a lifestyle more comfortable than any that has come before it. Yes, they want us to be comfortable and complacent, but isn’t it possible that we want that for ourselves as well?

Isn’t it possible that, given enough time, we could learn to love Big Brother? Maybe…