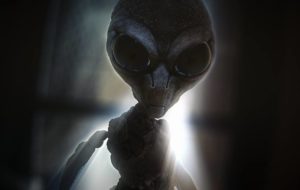 The unbelievable story that was described in John L. Guerra’s new book “Strange Craft: The True Story of an Air Force Intelligence Officer’s Life with UFOs”, reportedly occurred in the early hours of January 18, 1978 in Fort Dix, New York. Jersey.

Air Force Major George Filer was driving in a police pickup truck through a distant part of the base trying to follow a mysterious low-flying object that was observed around 2 a.m.

After traveling for two hours, he realized that the object he was pursuing was actually directly above him, creating an eerie blue-green glow.

The next thing he remembered, an entity, which he described in color as slim and grayish-brown, stepped out of the darkness in front of his vehicle, where the headlights illuminated it.

Filer drew his gun and ordered the creature to freeze, then fired.

The creature succumbed to her injuries and gave off a foul, ammonia-like smell, according to his report.

A recovery team from Wright-Patterson Air Force Base in Ohio later gathered the body. Filer noted that its existence did not seem to surprise the men who came for it.

“The senior master sergeant runs everything, from who sweeps the floors to organizing the staff schedules and making sure phones and faxes are up and running,” he said.

“He was agitated; his face was pale and his eyes were wide open.”

The sergeant answered when Filer asked him if the creature had come from another country:

“No, it was from outer space, a space alien. There are UFOs buzzing around the planet like mad.”

Scientists have suggested on what types of planets life can exist