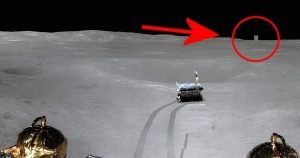 The Chinese lunar rover Yuytu-2, traveling on the other side of the Earth’s satellite, recently found a strange object on the horizon, about 80 meters from its location. The find excited the public: it was immediately nicknamed “the hut on the moon.”

A new image from Yuytu-2, published by journalist Andrew Jones, has shed light on yet another lunar mystery. As you might expect, we are not talking about any “house”, “base” or any other man-made object.

In front of us is an ordinary stone located on the edge of the Von Karman crater. In the first image from the rover, it looked much larger, and this, together with its unusual shape, created the illusion of artificial origin.

However, the researchers never had any particular doubts on this score. They immediately stated that we are most likely talking about a boulder that appeared as a result of a cosmic body hitting the lunar surface.

But this clarification has not calmed the conspiracy theorists. They assure that the moon rover could not get to that place so quickly and that the Chinese are deliberately hiding the real explanation.

Alas, now there is one less space mystery. At the same time, it should be said that the planets of our system, as well as their satellites, keep many secrets. It is unlikely that humanity will ever be able to find an explanation for all of them.