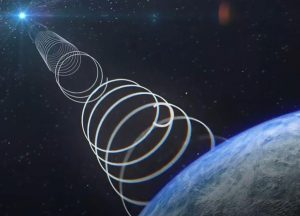 Researchers have detected a strange radio signal from the galactic center of the Milky Way that disappears and reappears, reports techeblog.com.

Ziteng Wang, a PhD student in physics at the University of Sydney, studied data collected by Australia’s ASKAP radio telescope in late 2020 and his team found 2 million objects.

The classification of a single signal coming from the galactic center has baffled the computer and the researchers. This object was emitting powerful radio waves throughout 2020, and its irregular structure, as well as polarized radio emission, was unlike anything the researchers had seen before.

This bizarre object could not be detected in X-ray, visible, or infrared light. In the end, the radio signal disappeared, despite the fact that scientists listened to it for several months using two different radio telescopes.

More surprisingly, the radio signal suddenly reappeared about a year after they first detected it, but within a day it disappeared again.

“The strangest property of this new signal is that it is has a very high polarization. This means its light oscillates in only one direction, but that direction rotates with time.

“The brightness of the object also varies dramatically, by a factor of 100, and the signal switches on and off apparently at random. We’ve never seen anything like it,” said Ziteng Wang, lead author of the new study and a PhD student in the School of Physics at the University of Sydney.