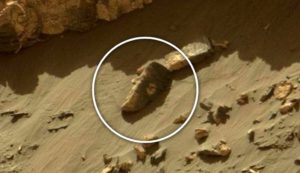 An anomaly researcher looking for strange and unusual objects on Mars ‘ surface came upon a photo showing the head of a statue lying in the Red Planet’s sands.

A user named’ lightworkx4′ had uploaded it back in 2015 with the caption “NASA Picture shows statues” and it seems to have largely gone unnoticed until now.

Theorizing that the artifact was a carving of a head, probably once belonging to a larger statue Waring marveled at his website that “the ear, nose, eye, and forehead all have great detail.”

Noting the oddity location on the side of a hill, he speculated that it might have been depicting some sort of Martian god “overlooking a long distance from the top of the hill to watch over all.”

As to the importance of discovering what seems to be the depiction of a face on Mars, the researcher suggested that it provides us insight into “who they were, what they looked like, who they admired, if there is male / female of the species … and much more.”

Of course, skeptics say that’s not the case at all and that, in fact, the ‘ statue head ‘ is simply just a rock made to look more impressive thanks to the pareidolia phenomenon.